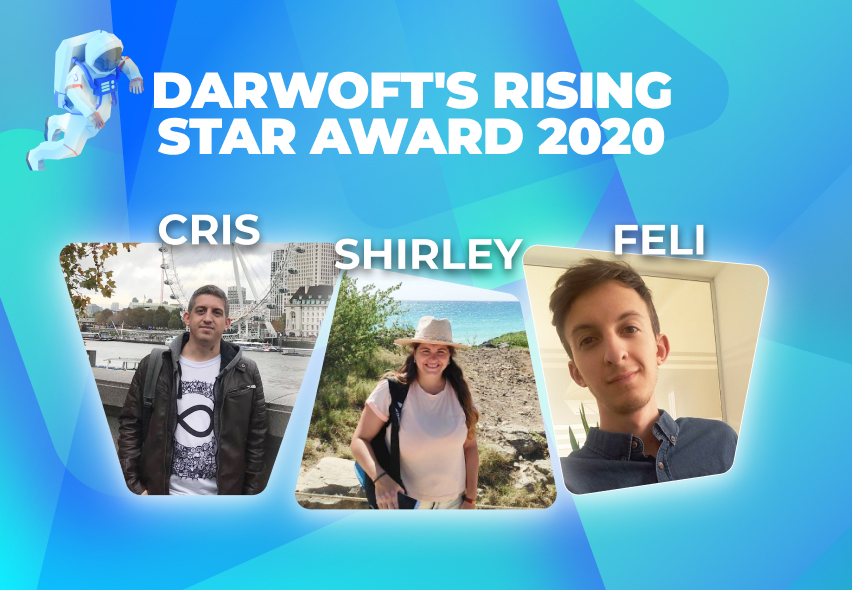 This surprise award is the most important prize the company can give. In 2017, we were lucky to reward those crew members whose work is outstanding for the first time.

We are pleased to announce the nominees for the Darwoft's Rising Star Award 2020.

But, first, a brief overview of what this means.

When did it start?

This surprise award is the most important prize the company can give. In 2017, we were lucky to reward those crew members whose work is outstanding for the first time. Winning this category in a well-known company is also a professional achievement that counts for the person's professional career.

To be honest, we also take the risk of being a little bit unfair because, actually, all the nominees have done an exceptional job.

Darwoft is a constantly-growing startup that incorporates good practices, defines new roles, specializes in sophisticated technologies, and contributes to the community every day.

This crew member has always shown a good predisposition to work tirelessly by helping his partners deliver high-quality products. As he possesses adaptive skills, he has a flexible approach that makes him become an exemplary leader. Besides, he has an advanced level of English.

It is a pleasure to work with Cristian since he always goes the extra mile for the company. He usually comes up with ingenious ideas to add value to the services we provide. For instance, implementing a tool like Cypress was one of his most valuable contributions.

In addition, having a multifaceted personality, he has proved that he is capable of recruiting new talent, conducting technical interviews, giving support to different areas, and mentoring and monitoring trainees.

Now, he is responsible for QA Automation, a field in which he often gets exceptional results. However, coaching, accountability and team building, following the company’s culture, are three activities that demonstrate his distinguished abilities. What is even better is that he is in a good mood all the time.

Last year, Shirley, an English-Spanish Translator, decided to make a career move and study to be a Project Manager, breaking out of her comfort zone. In her new role, she shows to be very active, organized, open to listen to others, and strong-willed. Darwoft is pleased with her consistent effort to encourage her teams and other coworkers when it is necessary.

Though her first projects were complex, especially one for HBOA which has several steps,
she was able to cope with them amazingly due to her sterling management abilities. Apart from that, her expertise in the English language makes foreign clients feel at home.

This crew member used to work for Fukuroo until the company started to collaborate with Darwoft, but he adapted fantastically to this change. Moreover, Felipe is so open to giving a hand that he also plays the role of a teacher. He is currently mentoring a partner.

Despite the fact that he has only one year of experience, he achieved a Senior level thanks to his nimble and spirited performance. Constantly learning and looking for technical excellence, he has been already rewarded with the 4x4 Challenge Award. He is breaking all the records. He is well-known as the Chuck Norris of programming.

Nowadays, he cooperates with American clients who are satisfied with his work because he has revitalized their projects.

Congratulations to all of you!

Thank you for being part of this rocket!

The winner will be announced at our virtual end-of-year party this Friday afternoon.