8 Benefits of Progressive Web Apps You Need to Know 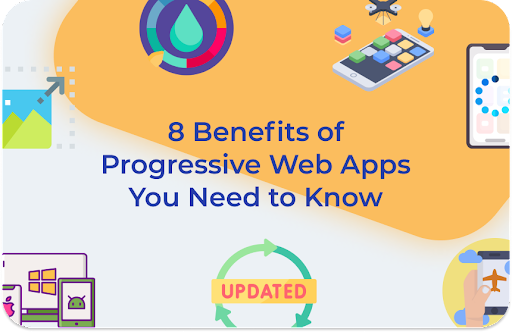 Progressive Web Application multiplies by ten the chances of accomplishing better results in sales. PWA takes the shape of a mobile application but with enhanced capabilities, such as the flexibility to run on different devices or the offline system, it becomes a solution without precedents that definitely strengthens your brand.

What is a Progressive Web App (PWA)?

The term Progressive Web App was actually coined by Google in 2015, but its popularity has been largely growing during the last years since it combines the best of Native and Web apps to fit mobile and wearable devices. In other words, as its name suggests, a PWA is a web app that progresses gradually until it is capable of adding features that are typical of native apps.

Though it is estimated that there are nearly half a million mobile apps — the so-called native apps — available in stores, a study in the US has found that the number of downloads per month of new apps accounts for 0% Researchers have demonstrated that people prefer installing well-known apps they use every single day instead of downloading new ones considering the storage space they consume and their capabilities. When it comes to bringing up-to-date with all the latest trends in businesses, users just check what is happening by looking this information up on Google, which will immediately redirect them to a website. To win this battle and stay one step ahead of the unceasing tech changes, building a Progressive Web App (PWA) comes off as the best solution since its mobile capabilities turn it into a competitive product.  Among its outstanding characteristics, the following ones position it as promising software development:

Let’s set forth these benefits:

To put it in another way, it is built by following the same design thinking process and best practices applied to the architecture and coding of any standard mobile app. And we all know how receptive people are to mobile apps since they are close at hand, and offer a user-friendly experience and easy access to the content they need whenever and wherever they want it. On the plus side, as well as it happens when native apps are installed, the icon appears on the home screen.

As it has been said in the previous paragraph, PWAs look like native mobile apps. What is even better is that they include similar and improved mobile capabilities. By developing a PWA, you make sure your customers will have an engaging and rewarding experience

If you have a business and decide to invest in a PWA, you can completely forget about the multiple versions of operating systems because this kind of app runs on all of them. In short, everyone can use it, independently of the core properties of their devices.

Even if you already have a mobile or a web application for your business, you can build a PWA by using existing code.  This goes along with the concept of interactive programming that is the process of writing or rewriting existing code while these apps are active. Service workers play an essential role in this instance, being the real protagonists that allow code to be installed and executed.

Aligned with the idea of making impactful yet not intrusive changes on the application, developers are highly trained to create updates that are automatically incorporated to the progressive app. Undoubtedly, this represents less work for the user who is not in charge of being alert to the launching of new versions.

Another pro of PWAs is that no wi-fi connection is required since users can carry out tasks offline. It is conveniently stored in the cache memory. However, the first time it is used, an Internet connection is needed to integrate all the data into the device.

How many times have you cleared up your phone’s internal memory or SD card to download a native app? Your customers will not be concerned about it considering the fact that PWAs are super light and cover only a small portion of the storage capacity.

Whether you use existing code to program a PWA or build it from scratch, you will be saving money because of three key factors. First, as it has been mentioned at the beginning of the article, this app has the best of both worlds, i.e., a blend of a standard mobile app and a standard web app. Developing two apps means having a codebase twice. However, when building a PWA, there is only one codebase to manage. Second, you might hire a small development team to provide this solution since developers do not need to know two different languages to code this app — a situation that works the other way round with standard apps. Third, your business does not depend on advertising campaigns and a budget to pay for putting the app on any store since installation is no longer necessary. As PWAs are also able to push notifications, your customers can land on your business page at any time on- or offline. On the contrary, with a standard app, you would have to wait until your customers had an Internet connection to send them notifications.

In summary, adopting a business Progressive Web Application is highly recommended because it has a wide range of benefits that multiplies by ten the chances of accomplishing better results in sales. Considering that a PWA takes the shape of a mobile application but with enhanced capabilities, such as the flexibility to run on different devices or the offline system, it becomes a solution without precedents that definitely strengthens your brand.

Would you like to know how your brand can benefit from PWAs?

Schedule a meeting with us!